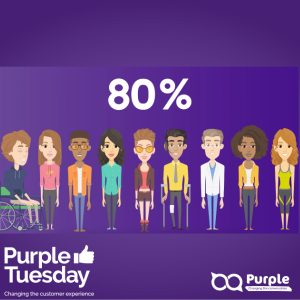 Last week in my blog post, I referenced the film The Good, The Bad and The Ugly.  I think it must have gone to my head.  Ideas of grandeur, as my Mum would say.  For the last few days, I have stepped into the role of Executive Producer and Scriptwriter as we created an animated video introducing Purple to organisations abroad, including a version with Arabic subtitles.

I must be honest.  The painstaking wizardry has come from my colleague Nikita, who has literally taught herself to build animation and is even the narrator.  An absolute great job she has done.

I have equally learnt a lot.  In this modern era more people will watch a short video than read this blog. Uncomfortable, perhaps, but true.  But that is life and if Purple want to change the conversation then we need to engage and adapt with the times.

I have said previously, adjustments for disabled people work for a wider audience.  Any video should always have subtitles.  For deaf people. Absolutely. But the evidence shows people will watch videos without sound at their desk or while on public transport, but without subtitles, they would simply scroll past and our message, missed.

Keeping it short is critical.  Traditional presentations are 20 minutes, and my track record tends to be a lot longer. Versus a video lasting approximately 3 minutes. 17 minutes of filler then!  I noticed recently on LinkedIn, videos are actively promoted for their brevity.  We have been conditioned.  Again, I might rage against the machine but have to comply.

Having such a short video focuses the mind and led to numerous edits from my initial meandering 8-minute script.  Whole paragraphs were ruthlessly deleted and others much more to the point.

The use of visuals and images become really powerful and part of the story telling.  It was interesting to note the difficulty of finding an animation programme a) that addressed disabled people and b) were not just the stereotypical wheelchair (not even with the person in it!).  And how do you then not fall into the same trap but subtly highlight all impairments including those with hidden impairments?  As stated at the outset the target audience for this video was international organisations which is why the $8 trillion Purple Dollar is referenced.  It is why I have also, awkwardly, included mention of my honour.

Some of the organisations and countries interested in the work of Purple are earlier in their disability journey and we have reflected this in some of our explanations in describing what we do, and in the language we have used.  Again, if people don’t connect with the message, then they simply will not engage at all.  Issues of disability are far too important to allow that to happen.  Conversely, it is important to convey disability as a social and economic benefit and not simply a commodity hard sell.

I am pleased with the outcome.  It was produced totally inhouse and all within 10 days.  I am less pleased I have started to use the phrase ‘it’s a wrap!’  That has to stop, otherwise my Mum will be proved right.